What if the social media platforms we have become so accustomed to were actual people? Would they remain as popular as they are now, or would people unfriend them faster than a Facebook game invitation spammer? 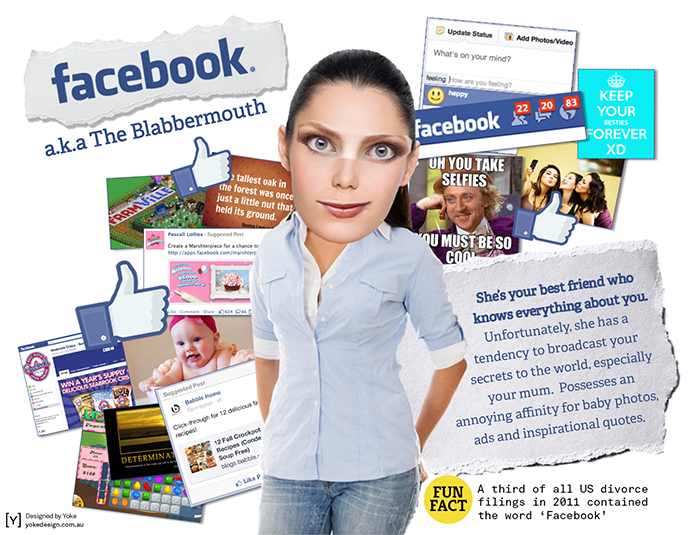 Face it – although Facebook has been your bestie since forever, she’s changed a lot since the heydays. A lot. In fact, she’s prone to sudden, unannounced personality changes that you’re not the least prepared for.

That’s still all well and good though, you are so used to her being around that you still catch up with her every day. Besides, you’ve been best buddies for so long now that she knows absolutely everything about you anyway. She understands you.

Still, it makes you a bit nervous that she has developed this worrying tendency to broadcast your deepest, darkest secrets to the whole word, unless you specifically ask her not to do so, every. single. time.

You think the photo of you dry-humping that stuffed moose at the Museum of Natural History might have possibly given a slightly too amorous of an impression of you to that recruitment agent last week when Facebook decided to whip out the incriminating photo on a whim. Still waiting for the agent to call you back though, so it could go either way, really. You shouldn’t blame Facebook – who knows, poor Facebook may be even suffering from Tourette’s?

Despite the trust issues between you and Facebook, you love how she can help you get news of that cretinous but hot ex of yours who left you four years ago. You keep telling yourself: “I’m not stalking per se, I’m just ‘staying informed’”.

You also appreciate how Facebook is genuinely interested in you and asks what’s on your mind every day. Who does that nowadays anymore anyway? She also likes absolutely everything you say, which makes you feel special and bright, maybe even a bit of a budding comedian. Heck, Facebook’s so amiable that even your mother likes her! It’s just slightly unfortunate that your mum now also knows about your weekend benders with Señor Tequila.

If you’re being honest, you’ve thought about de-friending Facebook more than once over the years because of her rather alarming flaws, but there’s just something inexplicably addictive about her presence. Lately Facebook’s been very much into pulling out an endless pile of baby photos, inspirational quotes and ads out of her pocket, which has driven you to reconsider your friendship yet again.

You’ll never be able to leave her though. 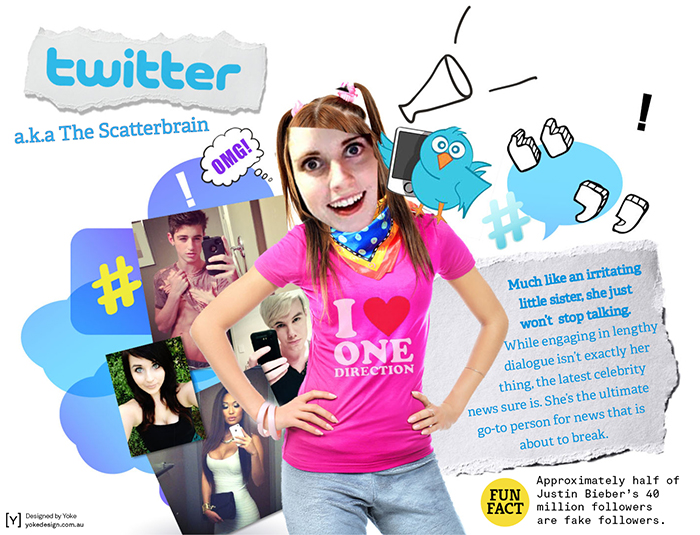 Twitter’s always talking. Most of the time she’s got absolutely nothing of value to say, but in spite of this, she has a compulsion to narrate her life in painful detail. Did you know she just experienced the explosive after-effects of yesterday’s Mexican takeaway? BAM, now you do.

Blatant truth be told, hardly anyone can listen to Twitter’s stream of consciousness non-stop – her recount of that latest takeaway food experience does not exactly compete in eloquence with Oscar Wilde’s inspirational quotes. Unless, of course, she decides to directly quote Oscar Wilde to her friends for some brownie points – an act not entirely foreign to her.

Perhaps due to her possessing the attention span of an over-caffeinated squirrel, she has a tendency to talk in short sentences. Long, deep conversations are an impossible feat with her and you’ve learned not to even try. She will cut you short.

For some reason, Twitter has become very popular among the crème de la crème of modern-day celebrities. In her presence, these ultra-cool, paparazzi-hating tabloid stars somehow seem to forget their idol status and talk as if they were just normal people! You’ve pondered the reasons for this, and concluded that they must love her unassuming appearance. That, or her unquestioning fan-girl mentality.

Her inside connections make you secretly resent her, but you acknowledge that she’s the best person to go to whenever you want to know what the latest news is. If you can just go through the trouble of deciphering her highly abbreviated speech, you can afterwards relish the hipstery notion that you knew about the breaking news before it was broken. 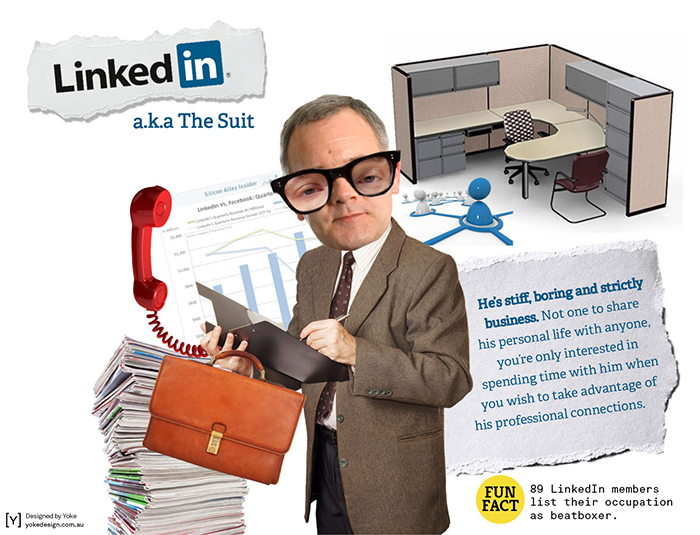 LINKEDIN, a.k.a. THE SUIT

Such a nice person this LinkedIn guy. So pleasant, so well-groomed, so very boring. The only type of conversation you can possibly have with him revolves around work.

“Is there anything more to him?”, you find yourself often wondering when forced to listen to him bragging about his extensive work history. You sometimes surprise yourself thinking about him in a Hawaiian shirt and shorts, only to deem it impossible. This guy must take his morning showers with his suit on.

You know absolutely nothing about LinkedIn’s personal life. Surely he must have at least 1.9 children, a golden retriever and a golf set? Or maybe he’s really into taxidermy? LARPing, maybe? You succumb to the fact that you will never know, as he is clearly not interested in sharing that information with you.

This ambitious ladder climber also never shows any interest whatsoever in getting to know you as a person either. He doesn’t ask you what you’ve been up to in your free time, which in all honesty is fine by you, as you don’t think it’s any of his business anyway. You have other friends to share your leisurely activities with, like your old trusted friend Facebook.

Spending time with LinkedIn might sometimes bore you out of your tiny mind, but it all serves a purpose – you appreciate the fact that he’s got a wide network of other professional friends who he can introduce you to. Especially recruiters and sales people are magically drawn to LinkedIn’s dry personality.

You are painfully aware of the fact that you tend to act differently around him compared to when you meet up with your other, let’s say, more laid-back, friends. Basically you’re just desperate to make a good impression on him and his influential friends.

Before meeting up, you go through a rigorous grooming process to look your best. You make sure every strand of hair on your head and face is properly placed, there are no spinach pieces stuck in between your teeth and that your suit has been liberated of those horribly unprofessional wrinkles. Before leaving home, you give the mirror a final look to ensure that your glued on, friendly – but not too friendly, smile doesn’t look too fake.

You feel a bit guilty about the fact that you only call LinkedIn up when you’re hunting for a new job. You’re only after one thing and you have no desire to spend any more time with him than you absolutely have to. LinkedIn’s your booty call, only for work.

Unfortunately for you, LinkedIn’s on to you and not one to easily forgive and forget. So, the next time you’re looking for a new sweet job and call up LinkedIn, he might very well get all passive-aggressive on you and start dropping hints to your boss of your devious ways. 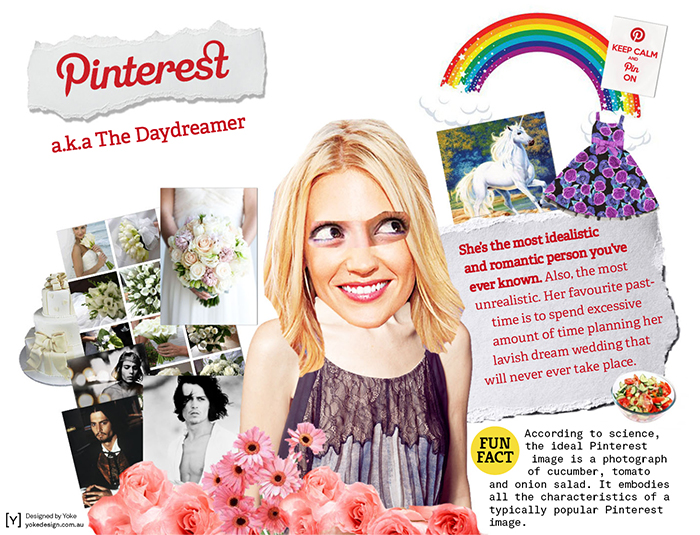 A modern day Disney princess, that’s what Pinterest is. Well, almost – she has to deal with mundane everyday tasks similar to Cinderella, she’s waiting for that fairy tale prince to rescue her like Sleeping Beauty, and she’s got her head in the clouds just like Belle from the Beauty and the Beast.

The only thing amiss here is the unpleasant fact that real life’s closer to a Game of Thrones episode than a Disney flick.

Pinterest lives in her own world, where birthday cakes always turn out perfect, where everyone magically gets a sexy body by drinking honey and cinnamon tea, and where weddings cost at least 2 million dollars.

Well, it’s nice to have aspirations, you tell yourself when you meet up with Pinterest. She’s a very lovely person, letting you know that she will serve you her homemade cupcakes, which were made to look like the Cookie Monster from Sesame Street. “Awe yeee, cool-ass cupcakes”, you rejoice.

However, what you discover on your plate is not what was advertised – an underbaked blob of dough with blue goo splurted on top. “Close enough”, you think and eat three.

Granted, Pinterest often fails in real life. You don’t hold it against her though, as you enjoy spending time with her dreaming about the perfect sugar-coated alternative universe where sparkly unicorns and eyeliner-heavy Johnny Depp live as your next door neighbours.

As divine as Pinterest is, it does get on your nerves sometimes that she has no original ideas whatsoever. Everything she talks about has already been done before by someone else, but she seems to be perfectly content recycling others’ ideas.

You don’t have the heart to remind Pinterest that the vampire-themed dream wedding she is planning for herself has already been done by 153 hardcore Twilight fans before her. 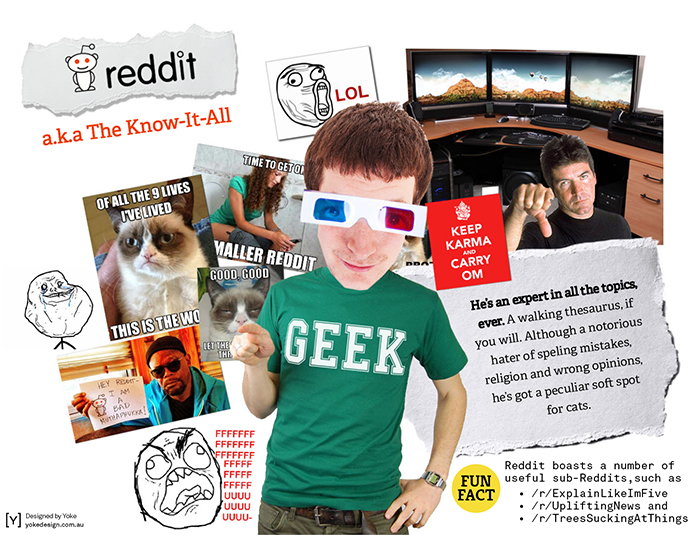 You love this awesome Reddit guy. As nerdy as he may be, you’re amazed by his endless knowledge of absolutely anything. Whether it’s a hearty laugh you’re after or battling with heavy existential questions, Reddit’s got your back covered. “Google it” is not part of his vocabulary.

He’s generally a very open-minded fellow, but you know better than getting into an exchange of words with him over politics or religion. His liberal and atheist views sometimes don’t go down well with the general public, but he takes comfort in his self-assured sense of always being right.

Mind you, you know that he’s not Mr Perfect. If you try to tell him something, one of his bad habits is to complain, in a rather unfriendly manner, how he’s heard it already. Frankly, this hurts your feelings a bit, but you understand that being all-knowing isn’t exactly easy and hope to surprise him next time.

What you do find somewhat amusing though is that your pal Reddit has a habit of imitating his colleague 4chan and tell 4chan’s stories as his own. You’ve come to realise that it’s just something that’s done in these guys’ circles. For example, after Reddit, the stories are recycled by Reddit’s arch nemesis Digg, and so on, until they reach their final destination Facebook approximately six months later.

Being all-knowing isn’t easy. You feel sorry for Reddit for the anguish he must feel whenever he spots a speling mistake or a grammatical error. Along with evangelical Christians, this is his pet hate. When meeting up with him, you get a bit nervous and tend to go back to correct what you’ve already said, just to avoid that disconcerting look of appalment and deep disapproval on his face.

Yet for some reason, you’re obsessed with him. His company is addictive – you catch up for a quick cup of coffee and end up spending five hours with him. You call him secretly from work. You text with him before going to sleep. You talk to him while on the toilet.

Maybe you do all of this because you don’t want to be forever alone.

Or rather, maybe it’s because you know that under that cold exterior of his is a person who has an intense love for sob stories, preferably about fluffy animals. Baby animals, if at all possible.