If you’re a vampire aficionado, it’s almost certain that you’re hooked on HBO’s popular TV series True Blood. Even if you aren’t into the pale bloodsuckers, it’s still pretty likely that you’re addicted to the show all the same.

17 June 2014 update: This analysis of True Blood’s marketing campaign was initially published in 2013. A lot has happened since then, and now that the hit seasons is about to return to our screens one last time with its seventh season, I’m going to take a look at how the much-applauded marketing campaign has evolved since its launch in 2008. 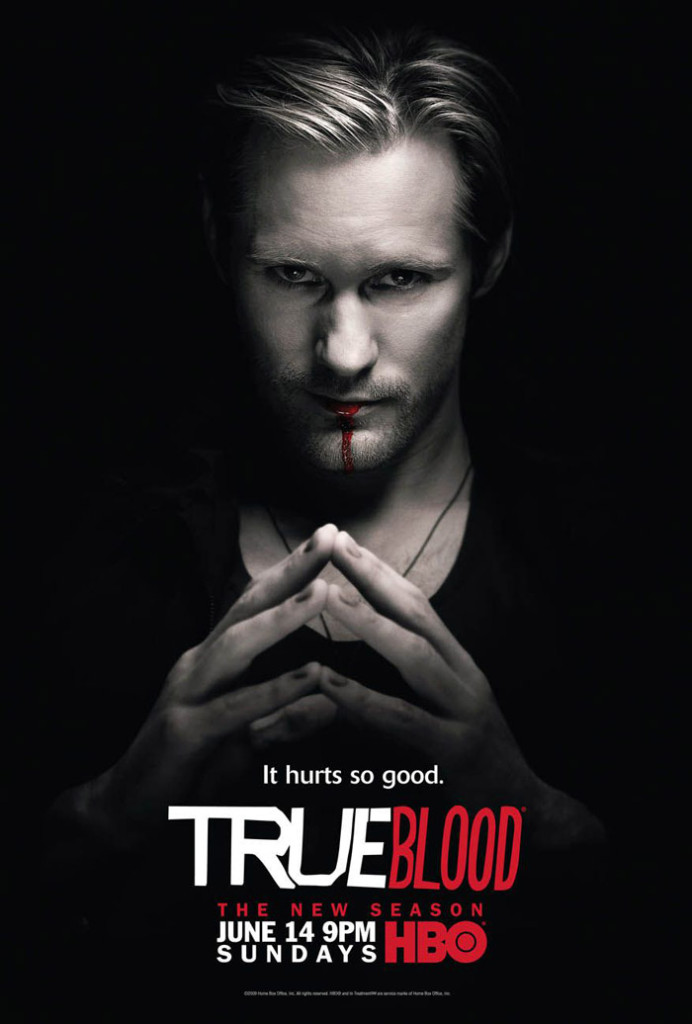 Without getting into the reasons why True Blood manages to keep people glued to the TV following the hazardous antics of a perky, half-fairy waitress and her pulseless nightwalker friends, I’m going to look at exactly how a fantasy series, so often of marginal interest, became so popular and mainstream.

The buzz around True Blood has been phenomenal. Many people working in the advertising industry have referred to True Blood as having one of the most well thought out marketing campaigns to date.

The campaign is on-going, but can be broken down into four parts; generating intrigue, extending the campaign, revealing the purpose of the campaign and, finally, maintaining interest. 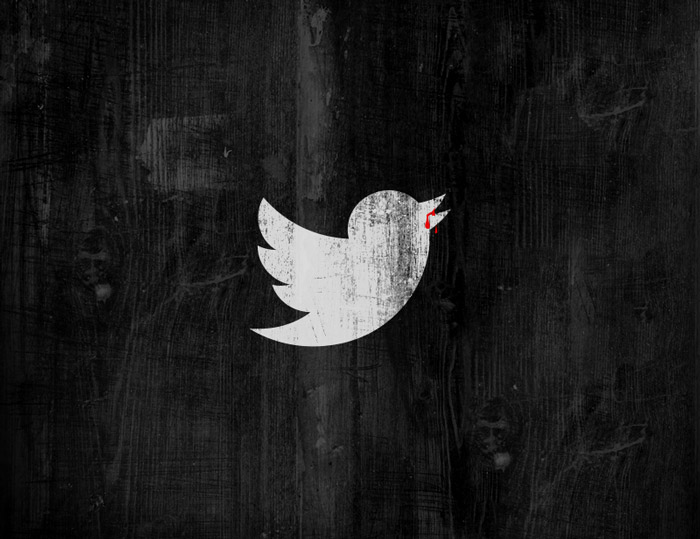 The marketing campaign was set up as a prequel to the actual TV series and was started off by targeting some of the top horror bloggers in the U.S. They all received anonymous packages by mail with ‘blood’ samples in them, accompanied by a cryptic message and a URL pointing to BloodCopy.com.

BloodCopy.com was set up as a web portal for ‘real-life’ vampires to connect and discuss their impending coming-out-of-the-coffin moment to the wider world. This imitated the plot in the actual TV series, where the vampires decide to come out to the world, thanks to a synthetic blood product titled Tru Blood that enabled vampires to survive without having to drain humans for nutrition.

Many marketing campaigns include some form of blogger involvement nowadays, but True Blood’s approach involved the bloggers more than the traditional, friendly email from the PR department.

The exclusive access to a ‘vampires only’ website that appeared to be a real and legitimate website for vampires, made the bloggers wonder what was going on, and subsequently share their puzzlement with their readers. This was, of course, exactly what the people behind the campaign wanted.

The campaign’s second part involved a wider audience and new marketing techniques, but the idea behind the activities stayed the same; blur the line between fiction and reality.

Passers by on the streets might have noticed the posters advertising a synthetic blood drink Tru Blood, only these advertisements were aimed at vampires, not humans. Some vending machines even had slots reserved for Tru Blood, only to display a disclaimer that Tru Blood had sold out, at around the same time when vampires where intending to step out and start ‘mainstreaming’. 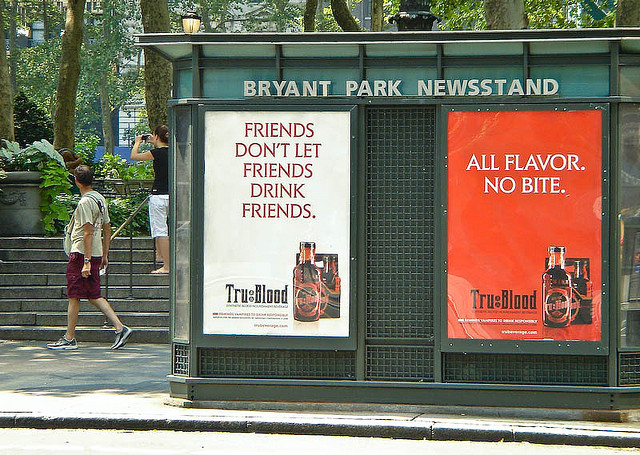 Furthermore, a documentary was released that depicted the history of vampires and included some of the characters from the TV series, still unknown at this stage to the general public.

This way HBO could grow the campaign organically to a wider audience and let the momentum grow before revealing the true purpose of the campaign.

After keeping people guessing and letting them potentially foster fears that vampires may be real after all, HBO launched a full, traditional marketing campaign that exposed the real purpose behind all the buzz.

HBO pulled all the campaign elements together and stepped into the limelight as the main culprit behind the campaign. They pulled on all the traditional marketing strings and engaged in a little name-dropping as well; HBO introduced Alan Ball, the award winning screenwriter, as being one of the leading forces behind True Blood.

Ball appeared at the San Diego Comic-Con and talked about the upcoming show to comic book enthusiasts and members of the press alike. At around this point mass media started to show some interest in what HBO and Ball had to say. At the Comic-Con, a comic book based on the show was also announced, which was certainly another clever way to gain fans for the show. 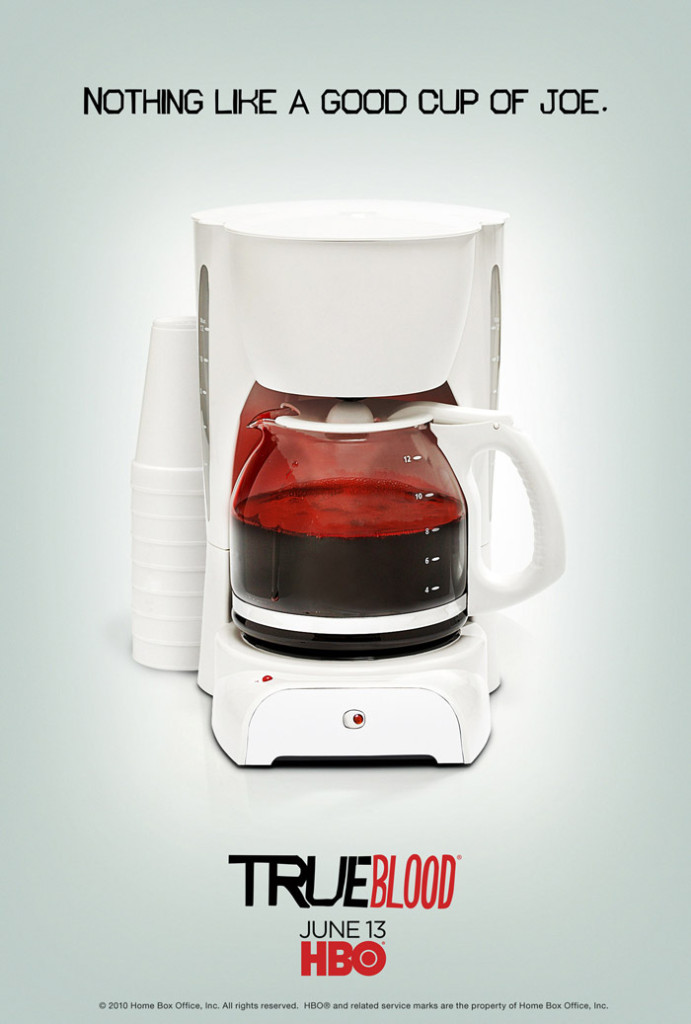 After the airing of the first episode that garnered 1.5 million viewers, HBO has done a great job at keeping up the interest in the series.

Specifically, HBO, with the help of True Blood fans, created a full vampire universe around the show. The main element in their strategy has been a very active online presence, with special emphasis on encouraging fan-generated content.

Although HBO has let True Blood fans run pretty wild with the series when it comes to user-generated content, they do also create great online content themselves. In addition to the usual behind-the-scenes footage, interviews and wallpapers on their website, HBO has created actual websites supposedly run by the American Vampire League as well as the anti-vampire organisation Fellowship of the Sun, just like in the series.

The detail that has gone into building these is immense. For example, the website of the Fellowship of the Sun has a current news section and even a banner advertisement promoting a singer that will be performing at their next gathering. 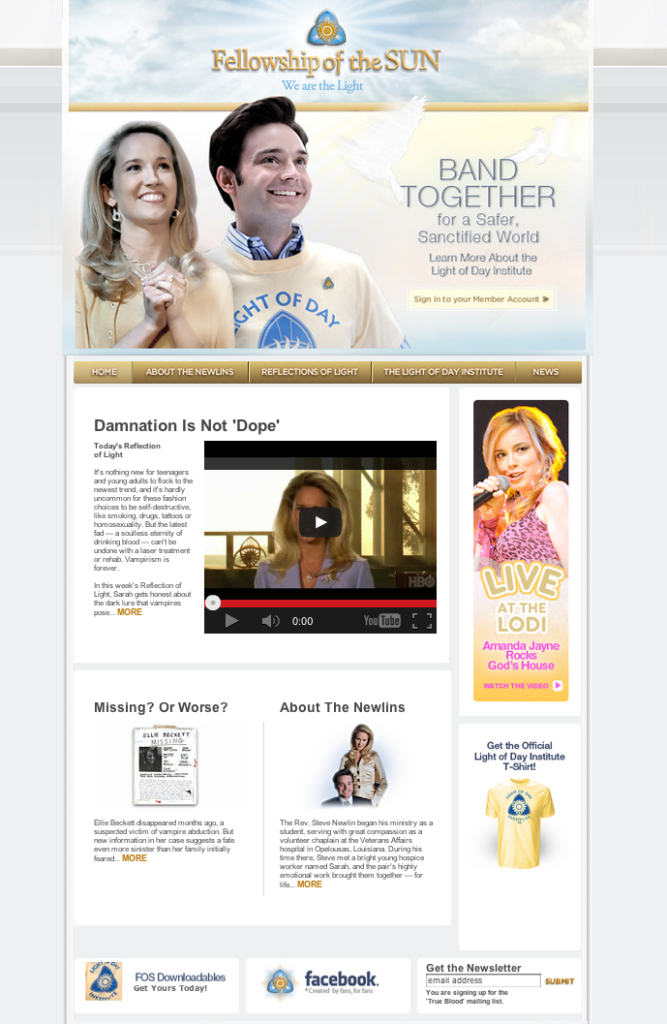 The forces behind True Blood’s active online presence go to great lengths to keep the illusion of a real world True Blood universe alive. They have also set up a blog for one of the newly-turned vampire characters in the show, where she writes about troubles she encounters as a freshly-made vampire. The fans are able to comment on her musings, although it is not clear how many of the comments are actually part of the campaign and how big a portion is fan-written.

The fans are pretty pampered in the True Blood universe; the most active fans are featured on HBO’s website and get their 15 minutes of fame in the spotlight, which underlines the fact that HBO acknowledges ‘Truebies’ contribution to the success of its show.

HBO also gives its Facebook fans sneak-peaks of upcoming episodes, posts easily shareable content on their timeline and encourages fans to interact with the content in multiple ways. For instance, their Twitter account features True Blood actors tweeting with fans while a fresh True Blood episode is being aired on TV, which provides some nice interactivity to the viewing experience.

Were the HBO team not familiar with the various unwritten rules of social media channels, the above would not have been possible. Without their understanding of modern memes and social media etiquette, the world would be devoid of gems such as #waitingsucks (Twitter hashtag for times when True Blood is off-air) and VILF (Google it).

HBO’s success in turning casual viewers into Truebies is directly evident in how some fans have created Twitter profiles for the True Blood characters and tweet as these characters. And rather than ignoring these fan contributions, HBO has listed these accounts on their official Twitter lists.

After seeing just how much detail has gone into the True Blood campaign, it should come as no surprise that the campaign has gone on to win numerous advertising awards and that the initial masterminds behind the marketing campaign were the same people responsible for the success of the Blair Witch Project’s viral campaign.

True Blood has built a solid following over the years by keeping millions of fans glued to their TVs every season with its oft-shocking plot twists. As the show has matured, so has the marketing along with it.

In the marketing campaign for season seven, no longer is HBO seeking to attract new viewers for the show; the storyline has had too many twists and turns for non-Truebies to catch on.

As the viewers have come to love and know the characters and the actors, there is, indeed, little need to uphold the illusion of a real world vampire community anymore. The viewers are already hooked; the need for smoke and mirrors in order to entice them is gone.

In an effort to intrigue the fans in other ways, the official website has given more space to the actors behind the characters and, for instance, prominently features their Twitter profiles for the fans to follow. The True Blood social media channels also repost the actors’ personal social media posts if they are related to True Blood. The above gives the fans a further way (in addition to the bustling Facebook community) to engage with the show and feel a part of the Truebie community.

HBO has shifted focus and put the existing fan base truly to the epicentre of True Blood’s final marketing campaign. In fact, the overarching core message communicated throughout the whole campaign – that of being sad that the show is close to its own ‘true death’ – could’ve easily been a brainchild of a devoted fan. The season seven poster shown below or the official hashtag #TrueToTheEnd serve as perfect examples of this. 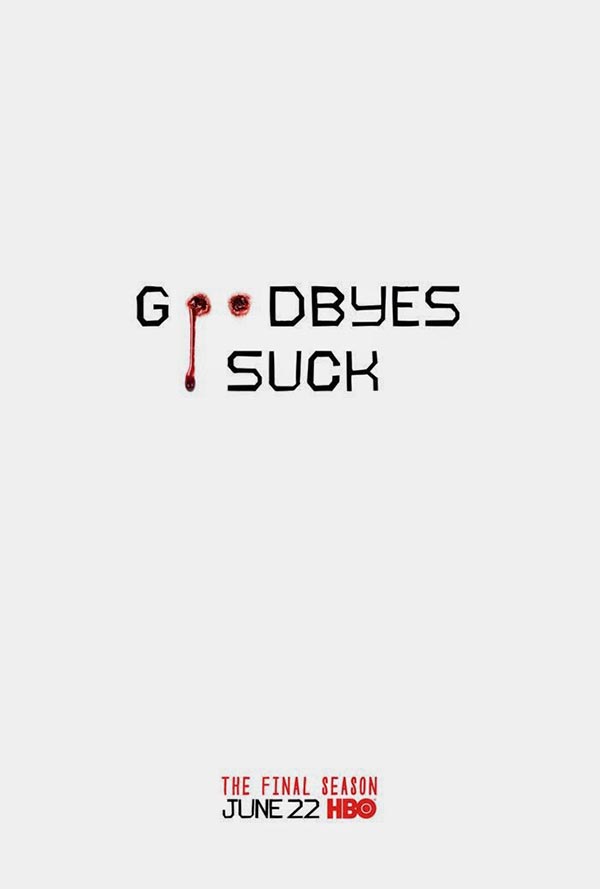 This year the campaign possesses a strong air of nostalgia and takes the fans to a journey down memory lane. Among the usual teaser trailers – released at regular intervals before the season start – have been videos showcasing particularly memorable scenes from the True Blood’s previous seasons, with catchy titles such as ‘unforgettable true deaths’, ‘fave first times’ and ‘sensational scene stealers’.

This not only reminds fans of all the past and present story lines in the show just in time before the start of the seventh season, but also reaffirms the bond between the show and the fan, almost resembling an interaction between that of two old friends reminiscing about ‘the good old times’. 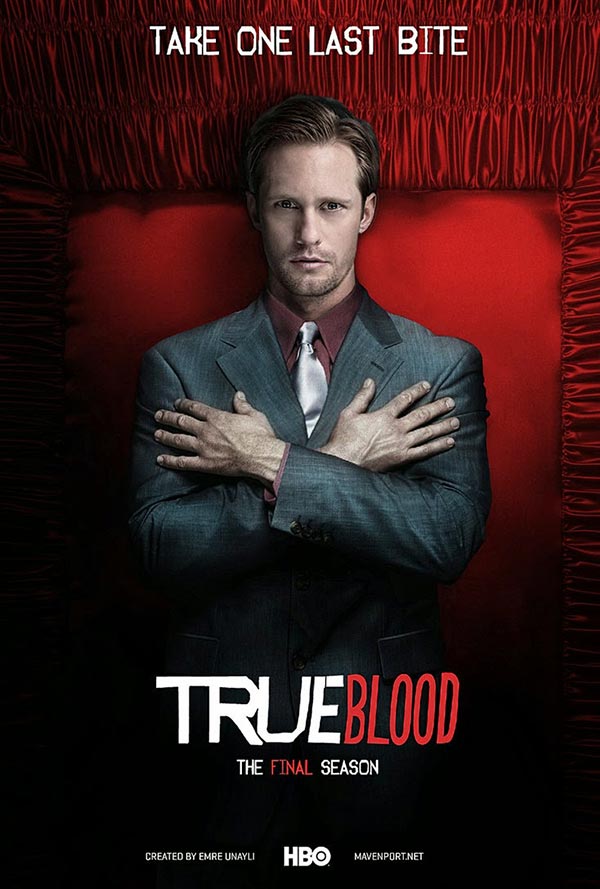 The theme of reminiscence has also been employed in the True Blood TV marathon that takes place the week before the start of season seven. What’s more, HBO has partnered up with Facebook and social curation firm Arktan to deliver a segment each night, hosted by True Blood actor Michael McMillian, that reveals, among other things, the True blood fans’ favourite suitor for Sookie and most popular villain. The data has been gathered from the plethora of Facebook comments (844,000 to be precise) left by True Blood’s fans since the show’s start. Once again, it’s all about giving the fans the centre stage and acknowledging their role in the show’s success.

Although the notion of nostalgia is big in this year’s True Blood marketing campaign, HBO has not stuck solely to the past. The company proves it still has its finger firmly on the pulse when it comes to the latest social media platform strategies as it has already adopted Instagram and now also two of today’s most buzzworthy platforms; BuzzFeed and Tumblr.

Over the six years of True Blood, following the True Blood marketing campaigns has been almost as exciting as following the show itself. The utilisation of unexpected, yet clever, marketing tactics and plot twists have excited both marketers and Truebies alike.

And although the specific marketing tactics may have changed over time, it is clear that True Blood has always stayed #TrueToTheEnd to fostering a devoted fan community. 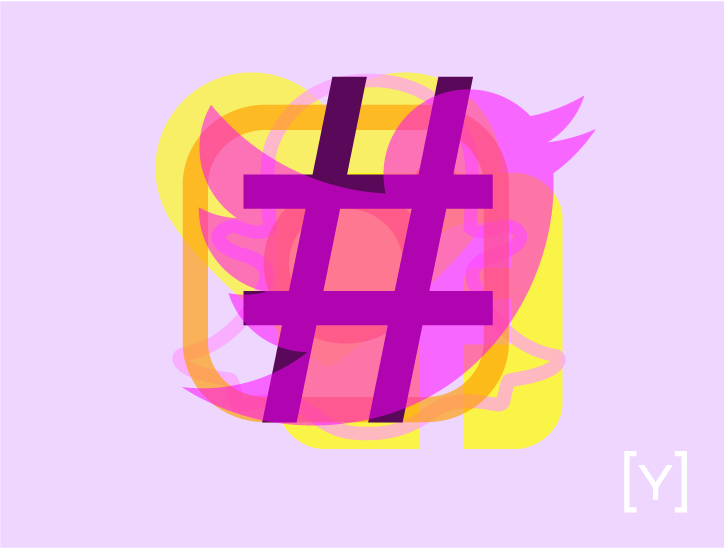 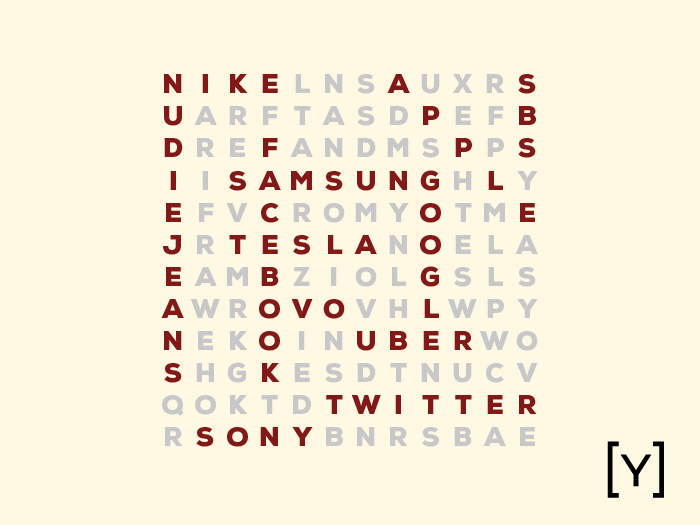